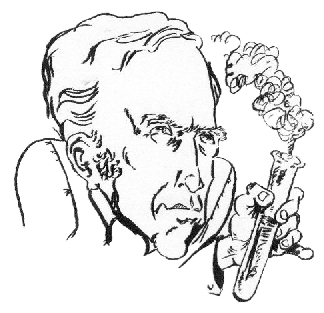 Eat your heart out, Barry Sharpless: Lars is still easily the most widely recognized organic chemist in the greater San Diego area. Just try asking random people at the next Padres' game.

A one-time northwest Chicago rough kid (once having to write "I will not throw snowballs" 103 times after attacking a school bus with his gang), Lars got his Ph.D. at UCLA, where he was a teaching assistant for Bill Richardson.

Lars officially retired a few years back, but still kept a desk in the department and occasionally emailed us to ask after a book that someone has taken from his collection. He was a founding member of the chemistry faculty at the graduate campus of the Tijuana Technological Institute, retiring in 2007.