Charles (Jack) J. Stewart served 1955-1992. A biochemist with research interest in CoA., Stewart received his B.A. in 1950 from San Diego State College (later SDSU), his Ph.D. from Oregon State, and did postdoctoral research in Germany. He served as Department Chair from 1967 to 1970.

In June 1967, San Diego State conferred its first Ph.D. This is how I remember the confluence of many diverse events leading to that achievement. It started with the growth spurt of all higher education institutions after World War II, the appointment of Malcolm Love as President (1952), the impact of Sputnik on science education (1957), and the passage of The Donahoe Act or the Master Plan for Higher Education (April 27, 1960). 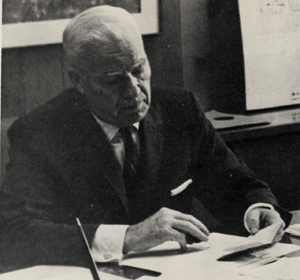 President Love changed the character of San Diego State College. His insistence on hiring well qualified faculty triggered the evolution of the institution from college to university. Love made the San Diego campus a leader and unique among the state colleges. Following Sputnik's launch, the budget of the National Science Foundation more than doubled. The Donahoe Act created the California State College (CSC) system and granted legal permission for joint doctoral programs between the CSC and University of California campuses. President Love wanted San Diego State to have the first Ph.D., and he chose Chemistry to launch it.

Why Chemistry? Chemistry had a history of Firsts. Chemistry was the first department in the State College System to be certified by the American Chemical Society (1950). The system of three year rotating chairmanships developed a farsighted chemistry faculty, which learned the political game and how to exploit it. In the late 1940's the faculty were doing research. Dudley Robinson had a small research project, and Drs. Isensee and Walba obtained an N.S.F. grant in 1953. Chemistry was among the first departments within the CSC system to confer Master degrees.

When I joined the faculty in 1955, Chemistry had the following professors: Neil Harrington, Bob Isensee, Lionel Joseph, Vince Landis, Amby Nichols, Dudley Robinson, Bob Rowe, John Spangler, and Hal Walba. In 1958, then Chairman Lionel Joseph convinced Dr. Arne Wick to leave Scripps Clinic and join our faculty. The department had completed designing the Chemistry Building (I got to add a walk-in-cold room) and it was under construction.

The Chemistry building was very cleverly designed: each teaching laboratory was attached to a "preparation room", approximately 100 sq. ft., with a lab bench, a chemical hood and, almost always, a door to an adjacent "one man" faculty office. In other words, research space for faculty was created. Remember this was the middle 1950s when line item budgets, office space, and staff were tied to departmental F.T.E., and all faculty mail was distributed in the basement of the Administration Building. The basement mail room was also where we signed for our pay checks.

When construction was completed in 1960, Chemistry acquired real laboratory research space rather than a bench in a temporary "T-building", and the faculty had grown. We had added Lars Hellberg, Earl Wadsworth, Jim Malik, and Reilly Jensen.

We wanted a Ph.D. program. Arne had a strong research reputation and grant funds. In 1960, Hal Walba, as Chairman, was awarded an N.S.F. Departmental Undergraduate Research Grant. This provided seed money for our recruits, and we agreed to hire only individuals with either post-doctoral training or industrial experience. We recruited vigorously. During Hal's chairmanship, we acquired Ed Grubbs, Walt Jones, Ed O'Neal, Bill Richardson, Morey Ring, Clay Sharts, Bill Ware, and John Woodson. We had become a very active research faculty with grants. Even I had one.

Following the signing of the Donahoe Act, the chemistry faculty had informal talks with the faculty at UCSD. The UCSD faculty indicated their willingness to negotiate "officially." In August 1963, President Love informed Chancellor Dumke of his intent to enter formal negotiations with UCSD, and he appointed an official committee in October 1963. It comprised Maurice Lemme, Dean of Graduate Studies, Donald Watson, Vice-President, Dudley Robinson, Chairman of the Division of Physical Science, and Professors John Spangler and Arne Wick. About a year later, President Love forwarded the Proposal for a Joint-Doctoral Program in Chemistry between University of California and San Diego State College, dated Oct. 10, 1964, to the Chancellor's Office for final approval.

Bob Metzger, with Arne as Major Professor, was enrolled in our M.S. program. He officially entered the Joint Ph.D program in the Fall Semester of 1965-66. President Love had his Ph.D. program. It was successful. The first joint Ph.D. Degree awarded in the system was conferred by SDSC and UCSD on June 9, 1967, to Robert. P. Metzger. Since Arne Wick was on sabbatical in Norway, I had the privilege of hooding Bob, the first Chemistry Ph.D earned at San Diego State.